Running a law firm on Linux 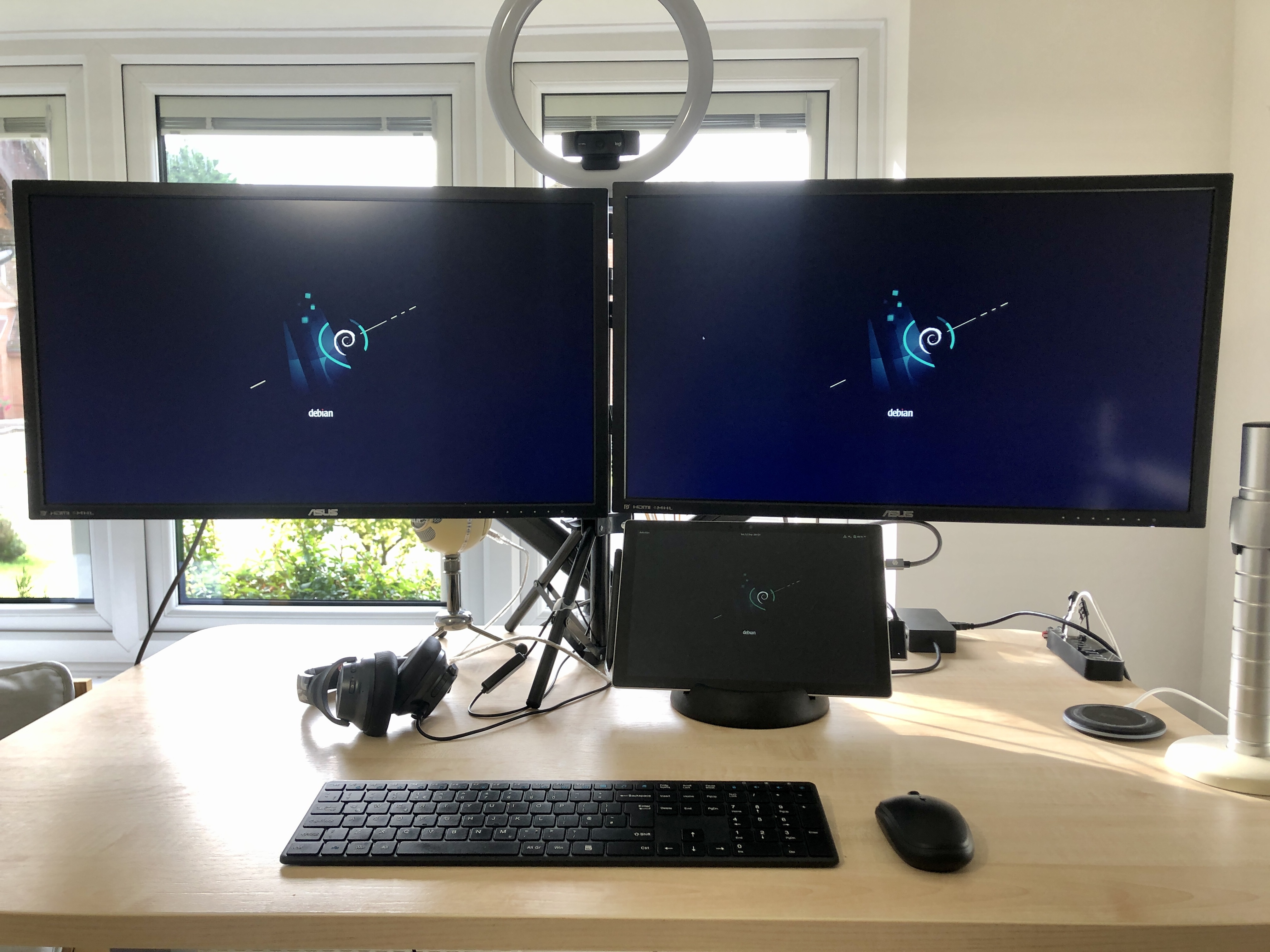 We are now three or so months into the world of running decoded.legal, and doing legal work, exclusively* on Linux1, so I thought I'd write about it.

I'm a client. How does this affect me?

Probably not at all.

After all, we switched about three months ago so, if you haven't noticed anything different by now, chances are you won't.

(And if you have, and you don't like it / don't understand why something has changed, please do say!)

But we use {Windows, macOS, iOS, typewriters, wax tablets} - can we still work with you?

Fair. If this doesn't interest you, wait for a future blogpost on some interesting legal update topic.

This was my biggest worry: could I cope with lawyering without Microsoft Word?

Let's leave aside whether Word is actually a good tool for lawyers. I'm unconvinced. But it is the de facto standard, and putting myself - or, rather, my clients - in a position where I could not deal with documents generated in Word, or to be reviewed by others using Word, would be stupid.

Well, so far - three months in - I've been mightily impressed by how much LibreOffice's Writer has come on since I last used it.

I have yet to find a situation which it has not handled, even if there are bits about it which I do not love or which I think could be handled better. (And those are mostly to do with display of comments and tracked changes.)

I took a day to read the manual, and get used to it, and experiment with it, and check out how it handled documents, comparing them with the same document open in Microsoft Word, so that I could be confident I could work as effectively and efficiently in LibreOffice as I could in Word. That was a day well spent.

I give lots of talks and lectures. Less so, during the pandemic, but still plenty. I never used PowerPoint much, but I did use Keynote and, on the whole, I rather liked it.

I've been less enamoured with LibreOffice's Impress than I am with writer. I just don't think it's for me, despite the day I spent trying to get my head around the way it does templates and theming.

But you know what? From adversity came triumph, as I (re)discovered pandoc and beamer. Now, writing a presentation is as easy as creating a markdown file, and converting it. Bingo.

I always spend way more time researching and writing what I'm going to say than I do on my slides - they are a backdrop, not the main feature - and being able to put down key points (and images; I like images) in markdown makes the whole process just so slick.

(I've yet to experiment with output into .html, for better sharing online, but that shouldn't be too tricky.)

If we host a video meeting, it's using jitsi. I'm impressed that a Raspberry Pi 4 is more than powerful enough for our (admittedly meagre) needs.

Getting Microsoft Teams working has been a bit of a tribulation, but it seems to work pretty well in the Brave browser (and also in Chrome).

Screensharing can be a bit iffy, but I don't need to do this often, thankfully. And, if I switch from Wayland to X11, even if just for that session, I expect it will work better.

I know it's a cliche, but I'd like to think we take security particularly seriously.

I'm not going to go into detail now - possibly a future post - but I'm confident that the systems and processes we have now mean we are at least as secure as we were before, and probably more so.

Obviously, it's a moving target, but there's nothing new there either.

Future employees / staff who don't want to use Linux?

Not something I'm too worried about, for three reasons:

Do you recommend it?

Well, so far, it's working well for us.

Whether it would work, or work well, for you rather depends.

If you think this might be up your street, do feel free to get in touch.

1) I'm struggling with a couple of bits on my mobile device, but my goal is to move away from my iPhone once I've resolved them. I'm close.

2) A scanner still relies on macOS so, even though it's a virtualised macOS instance running atop Linux (on a Mac Mini), it's still macOS. (I updated this to clarify it runs on a Mac Mini - from a licensing situation, macOS needs to run on Apple hardware.)

3) Some of our network infrastructure is Linux-based, but some is not (and is not going to be; I'm happy with what we've got, for now).

Responses to some of the themes on "Hacker News"

Amazingly - my blogposts don't normally get much attention - this was picked up on Hacker News.

Some quick responses to some of the themes (which I'll update as new themes arise):

But working with other lawyers/parties could be a challenge. I am not certain how Libreoffice could handle a 500 page memo being worked by 50+ people including thousands of track changes/comments

I don't know, but then I didn't do this with Word either. Most of my contractual work involves a handful of people, and definitely not that many pages. Thank goodness. (And I do still have a Mac, with Word, as a fall back.)

You may access zoom/teams through web but it won't be as convenient as the desktop client.

I guess this is a "YMMV" one - the experience has been pretty much identical to me.

I’m an attorney and it’s my job to practice law, not be ideological about my tools

Snap! Hence the move from Apple - which was annoying me - to Linux, which I know better than I know Windows. If Linux stops working for me, or this doesn't work out, I'll end up using something else. Pragmatism prevails.

It’s been a long time since I ran a Linux desktop ... and I could describe a “slave like life” where I had to endlessly fix driver issues, updates that broke functionality

Honestly, I was expecting this too, but then the last time I used Linux with a DE/GUI was, perhaps, 10 years ago! This has been remarkably unremarkable so far, from that point of view. (And this is with the touchscreen working on the Surface Pro 6 too - which is a joy to use.)

I guess it depends on the firm and what they do, but MS Word, with "track changes" and exchanging red-lined passages of text in a contract seems really common

Seems fine so far (and I spent a while comparing documents with Word, to make sure I was comfortable using LibreOffice. It handles tracked changes / redline well. I miss some of Word's options for how those are displayed.

Do people use browsers for their work stuff?

If my law firm switches to Linux, would they bill me more hours if they run into technical issues?

But I'm not sure I'll have any more, or less, "technical issues" than on any other platform. And, since most of the work we do is fixed fee, I'd be crazy to pick an option which made me less productive / effective.)

I would like to read a line or two explaining how this law-firm contributes to the F/LOSS community.

Great point, and the subject of a future blogpost.

The reason I'm still using macOS with the scanner, sadly.

I'm curious as to what scanner /needs/ MacOS.

I don't think it needs it - it can also be used easily with Windows - but whether I'll find something which works as easily as a networked scanner, with automated (and rather good) OCR of the scanned content, on Linux, I'm not sure. It's not something I use often enough to justify much time on it, but perhaps in future...

What do you use for crm ? Is that self hosted too ?

I have been thinking of " nextcloud" but I do not see the benefit.

Files in sync across multiple machines, mainly. (You can link in Collabora Online, for a Google Docs-like experience, but I haven't done that for a while.)

I didn’t spot the DE but I might have missed it because I largely skimmed the article.

Most lawyers are gits, yes.

Oh. Not what you meant. Right.

I’ll happily use git for interacting with source repos, but I’m not convinced I want it as a document management system at the moment.

Whenever I read an article like this („I am a CEO, I run my company on Emacs / Linux / Xyz“) I am reminded of Peter Drucker‘s book „The Effective Executive“. He distills five (?) behaviours, one of them: „Effective executives start out with the question, “What results are expected of me?” rather than with the work to be done, let alone with its techniques and tools.“

Use whatever works to get the job done.

Exactly. And, for me, right now, that's Linux.

Word, powerpoint, Teams... can't all these just run in the browser now? Why futz with Libreoffice?

Teams - a communications tool - in the browser is fine with me, and it's how I use it.

Word / PowerPoint in the browser? I haven't tried it, but I can see how it might work for others. Personally, I'd rather do my computing on one of my own computers.

has anyone here used decoded.legal? They do appear from time to time in articles on theregister. Would be tempted to try their services at some point.

I know that some people at some of our clients read HN.

Update: we’re an English law firm. So if you want advice on something other than English law, we’re probably not the people for you.

Interesting to see the blogger is using a linux tablet - specifically what seems to be an HP machine.

Nope, it's a Microsoft Surface Pro 6. Some other bits I've written about it:

Why not latex and track changes?

What I wear for work is my own business!

Sensible answer: I'm happy with LaTeX templating for pandoc, but I don't want to write all my documents in LaTeX. For advice notes, I use markdown and then convert that using pandoc, but tracked changes implies exchanging a draft with someone else and, frankly, they'll be using a Word-openable format, so I'd be silly not to use something which works with them too.

Is working on a Mac as difficult?

It has its pros and cons, like most everything. But I've used Linux for longer than I've used macOS, and I don't find Linux "difficult", so "as difficult" is a tricky / odd comparator for me.

I'll probably write a post - over on my personal blog, I expect - about why I've become less enamoured with Apple and macOS.

I wonder if they are going to switch to GNU/Linux phones.

I'd like to, but I doubt it. Here's my experience with UBPorts. I could be tempted by one of the new PinePhones, but it would be silly of me to try to get one of the early developer ones, as others can make far better use of them than I can.

More likely it will be running /e/.

Heresy! vim, thank you very much.

decoded.legal and the seven OSI layers for Internet, telecoms, and tech legal advice