Drafting clearer contracts, and why you should care 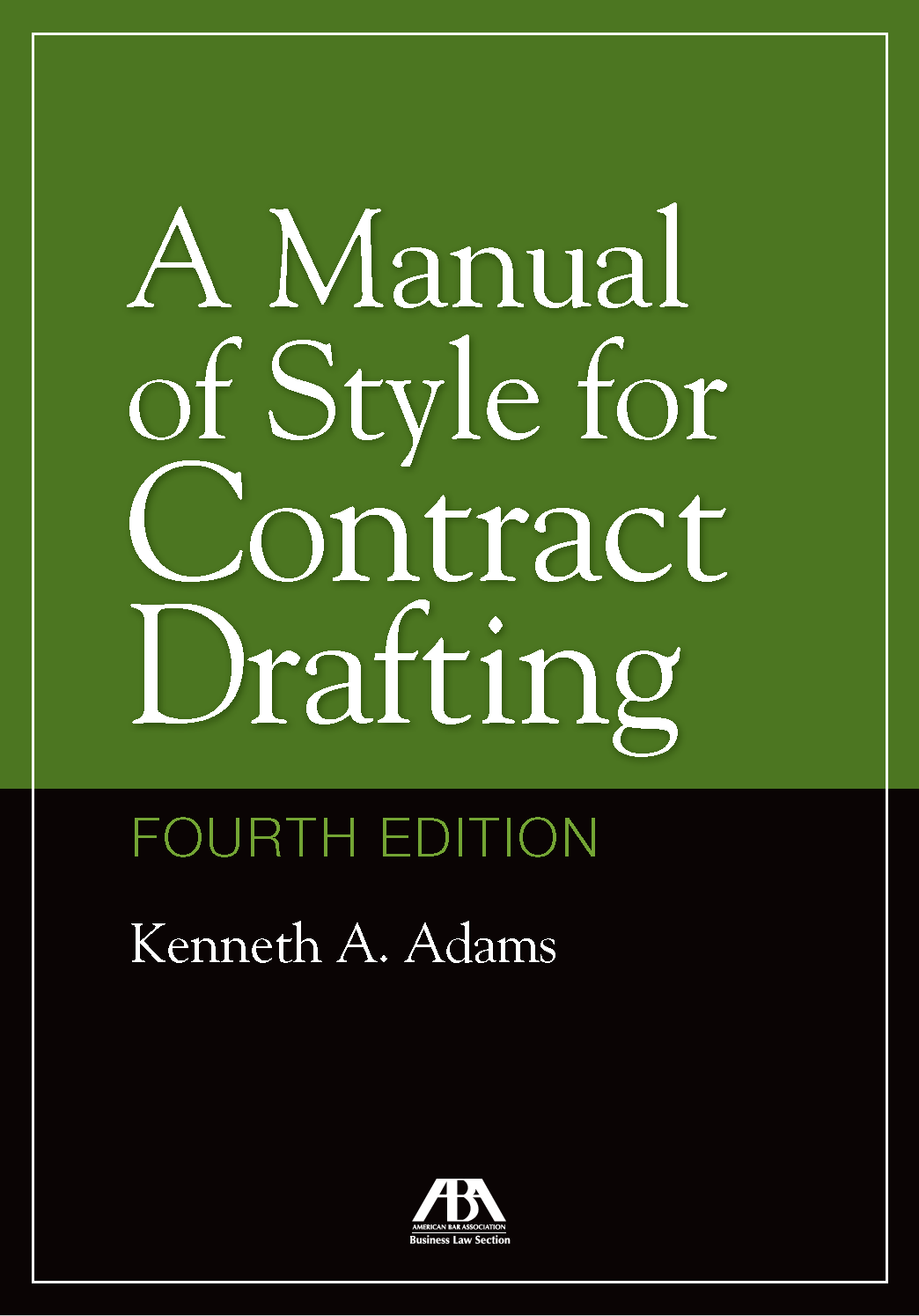 The course is described as "Sophisticated online training in drafting clearer contracts", and that's an entirely fair description.

It's based around Ken's "A Manual of Style for Contract Drafting". (I wished, throughout the course, that I had an eBook version of the Manual, and I've only just noticed that there is one. Aargh.)

(For avoidance of doubt, Ken hasn't asked me to write this, and these are my thoughts alone.)

How the Masterclass works

The class is split into an hour's seminar each week, for eight weeks, and what amounted to between one and two hours' pre-reading for each class.

Ken delivers the seminars over Zoom, and it worked very well. Each session was a combination of Ken giving a rapid overview of the material covered in the pre-reading, and discussion about how to apply the week's lesson to different contracts.

Ken is a great lecturer and facilitator (it's clear that he's done this many times before), and each week I looked forward to the class.

The class size was sufficiently small — about seven of us, on average, as not everyone student could make every session — that there was plenty of scope for discussion, and to hear the other students' thoughts.

My feeling is that, to get the most out of the class, you really do need to be prepared to contribute to the online sessions. But if that isn't for you, Ken was clear that, if you didn't want to do so, that was fine, and to drop him a line if you didn't want to be asked direct questions. I thought that that was a really inclusive touch.

The seminars were recorded, presumably primarily for the benefit of those who were not able to attend. I can't see myself re-watching the sessions, simply because it is more convenient to look things up in the Manual.

The pre-reading was a mixture of chapters from the Manual, selected blogposts, and practical exercises, based on applying that week's principles to real life contracts.

Obviously, it's up to you how much prep you do — it's not school, and no-one's going to be checking you've done your homework — but I wanted to make the most of the classes, and so did the prep in full.

Ken draws his examples from various English language contracts, mixing between US and English law. The underlying legal principles don't matter too much — this is not a course about substantive legal issues — but it was interesting to see how some formulations are more common in US law arrangements, and others in English law arrangements.

What I will be doing differently

I was slightly hesitant to take the course, as I felt that I already did a good job at writing in a plain, easy to understand, manner, producing clear contracts.

Indeed, clients have commented numerous times on just how clear their documents were, compared with what they were expecting, or their experiences of working with other lawyers.

At the back of my mind was the nagging though "Was I going to spend eight weeks covering things which I already knew?".

I clearly had an over-inflated opinion of myself since, while I still reckon I did a good job before I did this course, I am confident that I can do an even better job now, as I learned a huge amount.

The main thing I took from Masterclass course was a more rigorous structure for approaching clear drafting.

Before, I had a rough set of rules that I would apply — a kind of personal set of drafting conventions, I guess — but my own conventions were neither as complete, nor as structured, as the Ken's thinking.

Now, I have a much broader toolkit, drawing on Ken's extensive experience and thinking, and I can bring these years of research to my clients in addition to my own thinking.

The course doesn't go into everything covered by the Manual, but it covers the main things, so take a look at the Manual's index to see what I mean when I talk about breadth and completeness.

... and a head start in applying it

Moreover, thanks to the course (as opposed to just reading the book), I've had eight weeks of experience in applying it, and hearing how others on the course, and Ken, would apply the principles to different situations. That, for me, is one of the two main reasons for taking the course over just reading the book: the practical application of the reading.

(The other main reason for taking the course was that it forced me to read the book. You know how it is — you buy a book with the best of intentions, but never quite get round to reading it. Knowing that I would need to discuss certain things the next Wednesday was a definite motivator.)

One the main habits I intend to reverse as a result of the course is my former preference for "must" over "shall". I felt that "shall" was anachronistic and unnecessarily formal. I still kind of think that — I'm not fully convinced. But I see the benefit of using "shall", from the perspective of certainty, so I expect to use it when I intend the contract to impose an obligation on someone.

What will my clients get from my attendance

As I say, I've always aimed for clear, comprehensible contracts. I can now take that to the next level, and do it in a more structured manner.

This is a hypothesis right now, but my expectation — my hope — is that, by making contracts even clearer, the total cost of producing, negotiating, and signing, a contract will be less, as it should be a shorter, simpler process.

This is because there should be less scope of argument or misunderstanding over what a provision means, meaning that negotiating time can be spent instead on trying to get an agreement which works for all parties.

One area where I still need to think is the extent to which I am willing to modify a contract received from someone else, with the goal of making it clearer. There's a definite benefit to my client in this — see the two thoughts below — but there's also a cost, in terms of my charge for the time and skill I would be expending in doing this. I expect it will need a case-by-case consideration.

For drafts which I prepare, or template contracts, it's a no-brainer, and I've put time aside over the coming weeks to apply Ken's principles to my existing stash of templates.

Avoid — or at least lessen the likelihood of — disputes

The key goal of making contracts clearer is to lessen the scope for disputes.

I helped a client settle a disagreement a few years back, which was essentially an argument as to whether a clause in a supplier's agreement gave the supplier a right to issue an invoice, or just set out how they had to invoice if they already had the right to do so. My client benefitted quite substantially from that ambiguity, as we could argue convincingly that the clause covered only the formality for issuing an invoice, and that the supplier had to find a different part of the agreement which gave them the right to do so. And they could not.

I'm not naïve enough to think that this will totally eliminate disputes, but it should reduce the likelihood of them, and the resulting certainty has a definite value.

A by-product of a rigorous drive for clarity is that it foregrounds aspects of a contract which remain vague — an obligation to do things within a reasonable time, or a remedy which arises in the event of a material breach — meaning that time and effort can be spent on fixing those, if needs be.

Documents which are even easier to understand

I think there's an innate benefit in having documents which are easier to understand, but there's a practical benefit too: reducing the need to have a lawyer tell you what your own contract means, after you've signed it.

This is particularly valuable for anyone who needs to refer to the contract on a day-to-day basis, or to have initial discussions with a customer or supplier before engaging legal support.

It should also have an advance in terms of convincing an account manager or similar on the "other side" of a relationship, since it's much harder to argue with something phrased in a clear, precise, readily-comprehensible manner.

I want to book "Masterclass"!

Here are the current courses Ken's offering. He runs them at different times of the day, so there's probably one which fits your preferred timezone.