Book recommendations for 2020, and my favourites from 2019 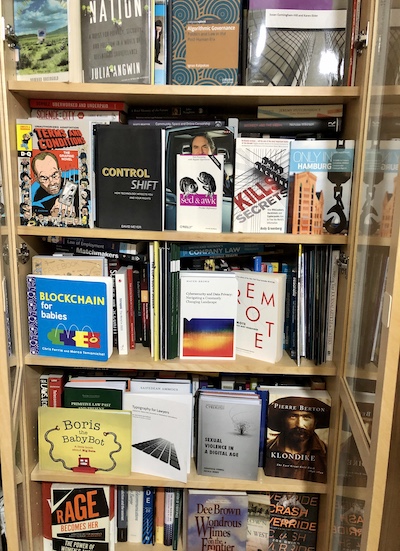 I asked on Twitter for some thoughts on books I should be reading this year, and I got a superb response.

Here's a list of what was recommended, along with some thoughts of my own, and a list of the books I enjoyed last year.

(Authors: links are to their Twitter accounts, where I know or follow them. Books: I've used Amazon links, but if you'd rather buy from elsewhere, I expect some (if not all) are available from other stores.)

If you've got recommendations which are not on this, please do drop me a line — I'd love to hear from you.

Recommendations for this year:

Paul Bernal's "The Internet, Warts and All: Free Speech, Privacy and Truth". I've heard Paul lecture about the themes in his book but, embarrassingly enough, I have not read it.

Andrew Murray — whose own Internet law book is one of my all-time favourites — suggested Julie Cohen's "Between Truth and Power: The Legal Constructions of Informational Capitalism", as a complement to Zuboff's "The Age of Surveillance Capitalism".

Nanjala Nyabola's "Digital Democracy, Analogue Politics: How the Internet Era is Transforming Kenya", was suggested as offering an African perspective on political misinformation and Kenyan elections.

Not a book, but there was a recommendation for "cryptolaw".

Peter Pomerantsev's "This is Not Propaganda: Adventures in the War Against Reality".

James Bridle's "New Dark Age: Technology and the End of the Future".

Gretchen McCulloch's "Because Internet: Understanding how language is changing".

(Terence Eden also recommended Sarah Jamie Lewis' wonderful edited book "Queer Privacy". It's not on my list for 2020 as I've already read it, but I highly recommend it if you have not.)

Brian Kreb's "Spam Nation: The Inside Story of Organized Cybercrime-from Global Epidemic to Your Front Door".

(Chris Monteiro also recommended "Kingpin: How One Hacker Took Over the Billion-Dollar Cybercrime Underground" — another one I've read, and, of the several takes I've seen on the original "Silk Road" investigation, this is the best.)

Cory Doctorow's "Information Doesn't Want to Be Free: Laws for the Internet Age".

James Griffiths's "The Great Firewall of China: How to Build and Control an Alternative Version of the Internet "

Lizzie O'Shea's "Future Histories: What Ada Lovelace, Tom Paine, and the Paris Commune Can Teach Us About Digital Technology".

Phew. That should keep me going for a bit!

(And look how many have "short title: extra bit" as the title format — curious.)

Carrie Goldberg's "Nobody's Victim: Fighting Psychos, Stalkers, Pervs and Trolls": my stand-out book for 2019, with a powerful depiction of how some people abuse online services, and how the operators of those services don't always get the response, or service design, right. Whatever your position on the "online harms" debate, you need to read this.

Zoë Quinn's "Crash Override: How Gamergate (Nearly) Destroyed My Life, and How We Can Win the Fight Against Online Hate": a horrifying real-world insight into the personal impact if sufficient people on the Internet turn against you .

Joseph Menn's "Cult of the Dead Cow: How the Original Hacking Supergroup Might Just Save the World": a fun look at the rise of an eminent group of hackers, and their nascent relationship with law enforcement / government.

Caroline Criado Perez's "Invisible Women: Exposing Data Bias in a World Designed for Men": a much-lauded look at how much of the world is based on data relating to men, and its impact on women. I must admit I read probably 50% of this, and felt the point had been made sufficiently.

Milena Popova's "Sexual Consent (MIT Press Essential Knowledge series)": this didn't have an Internet angle to it, but a superb introduction to thinking about consent.

GDPR: it's not too late Time to change your personal data diet?